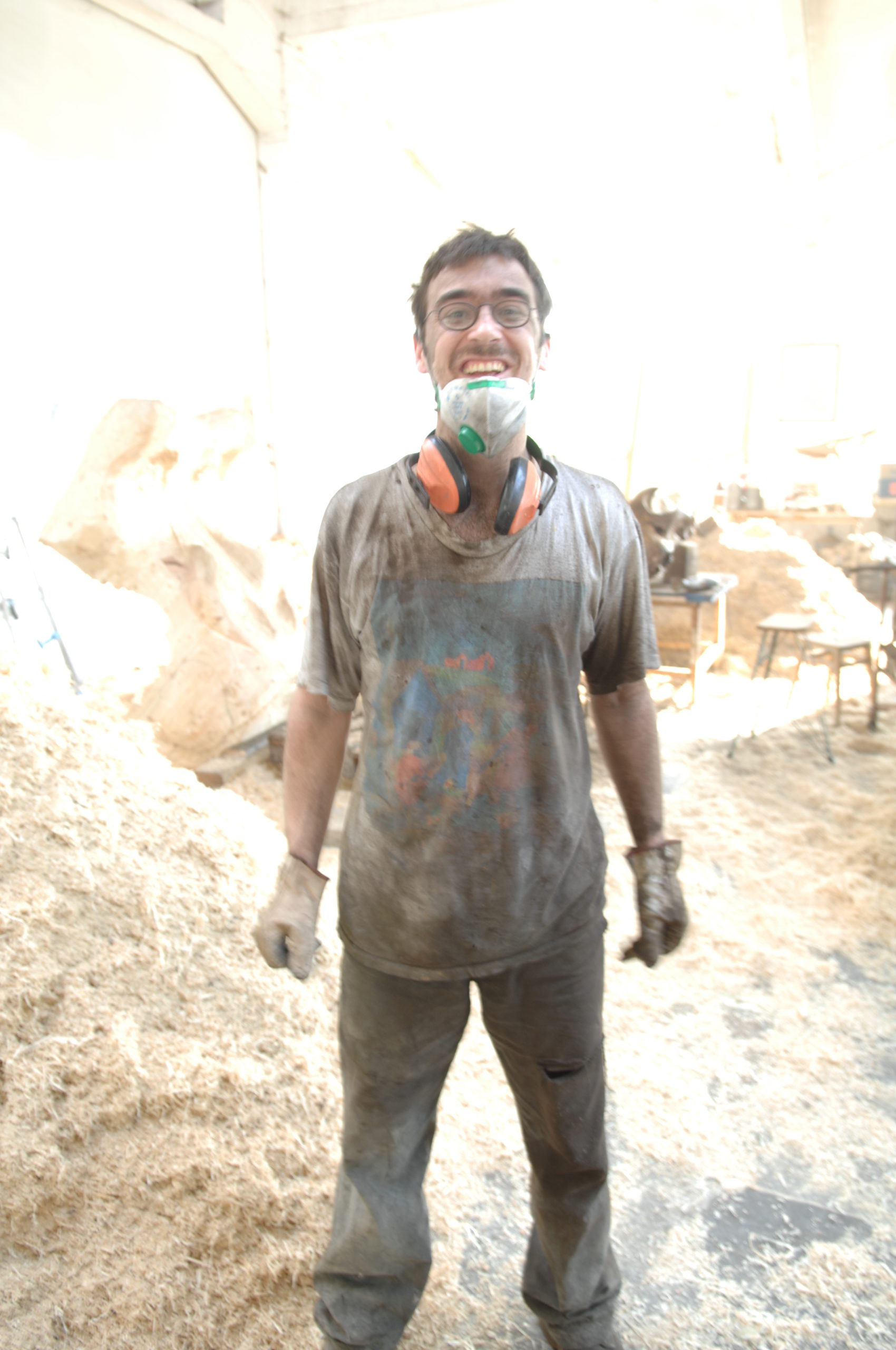 Quentin Garel was born in 1975 in Paris, France, where he lives and works.

After finishing his degree at the Advanced National School of Fine Arts of Paris, a scholarship at the Art Institute of Chicago and a two year stay at the Velasquez House in Madrid (a branch of the French Academy for a further degree), he now works in Paris with commissions of great prestige and his talent is internationally recognised. An installation of three great sculptures, commissioned by the Region, was inaugurated in the Park Chemin de L'Isle, just outside of Paris, in October 2005: the largest sculpture measures 6 metres in length and they are all made of iron. Another sculptural group was inaugurated in June 2009, a sort of enormous fountain inside of Parc des Gèants in the city of Lille in France, it is an immense “vegetable wall” of 30 metres in length and 2 metres in height, from which 28 animal heads, all made of iron, emerge from the wall and spray water inside of a wide circuit of bathtubs. From Spring 2015 until 2016 two large sculptures dominated the entrance of the Museum of Natural Sciences in Paris, where his personal exhibition was held in Autumn 2016. A one-man show titled “Beauty and the beast” was held, in collaboration with Fondation Valmont, during the Venice Biennale in 2011, at Palazzo Tiepolo in Venice, as a collateral event accredited by the Biennale. In 2019 a large retrospective representing 20 years of work took place at the Matmut Museum, Center of Contemporary Art of Saint-Pierre-de-Vargenville in Normandy. From January through June 2020 a major institutional exhibition entitled “Anomal” was held at the Castle of the Domaine de Chamarande, in France. The artist's bestiary has been distributed across the rooms and courtyards of this beautiful Domaine.
The protagonists of Quentin Garel’s works are animal creatures. However at the beginning, he used to investigate mostly farm and breeding animals such as cows, pigs and chickens, that is, the most common and banal animals, nevertheless the most vital to the human species, therefore submitted to the cruelest laws of an industrial intensive breeding in order to satisfy market demands. The “domestic” phase of Garel work was therefore on one hand a kind of commemoration of the animal “of consumption”, a sort of glorification of the creatures that mean nourishment to us and allow us to survive and, on the other hand, a denunciation of a lack of respect for Nature, a deep reflection on our planet Earth that inexorably seems to accelerate its own decline.
Particularly ironic were the works pertaining to the “Baigneuses” cycle (bathers), that is, funny goose and calves wearing bathing suits: the artist worked on a "ready-made" support of old tailor’s dummies made of wood.
Lately Garel has widened his research to all sorts of animals, such as great skulls and jaws or long beaks and bird skulls made of wood or either bronze or iron. The largest sculptures are placed on the ground and seem to emerge from the earth like ancient finds of an imaginary past.
However of late, hippos, rhinos, giraffes, crocodiles and frogs have started to populate Garel’s world. All of these recent sculptures belong to the cycle of works called “Trophées” (trophies).
From his father Philippe, artist and teacher at the Academy of Rouen, Quentin Garel has surely inherited the versatility and the ability to use the most different techniques and materials with amazing ease. The artist’s favourite material is wood, but bronze and iron fusions are of course the main feature of his work.
Being a sculptor, drawings are a remarkable aspect of his whole work: he uses crayon, pastel, charcoal and sometimes aquarelle on sheets of large dimensions (up to 3 metres in width). They usually represent great compositions where ostriches, frogs, pigs, skulls, beaks, jaws and great expressive eyes of cows and giraffes, emerge from a series of overlaps. The mark of the sculptor is evident, spontaneous and of great strength, a gestural expressiveness which is mixed to the anatomical analysis of every detail. They are not only studies, but they are unique pieces where the complexity of the composition dissolves into the lightness of the drawing. 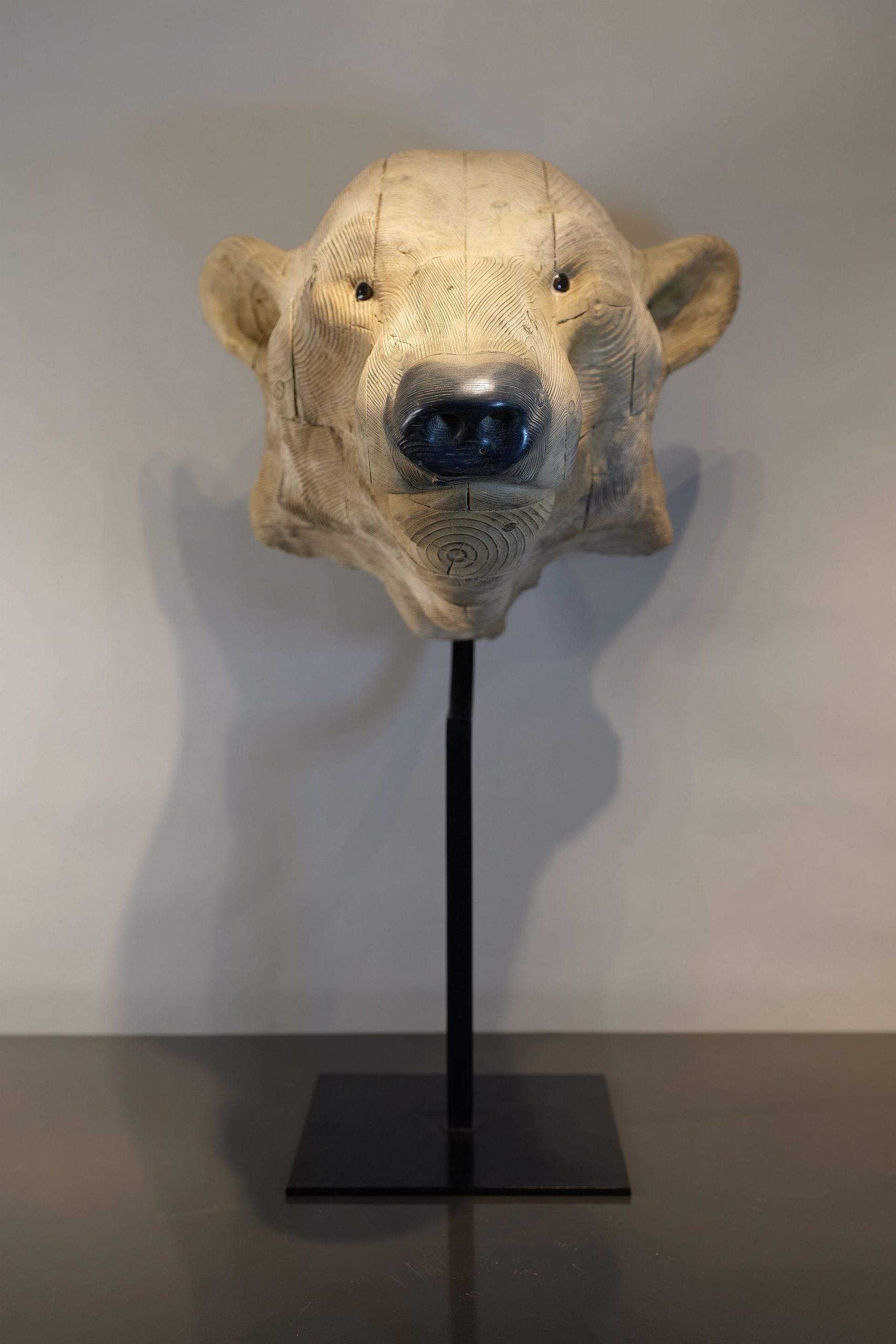