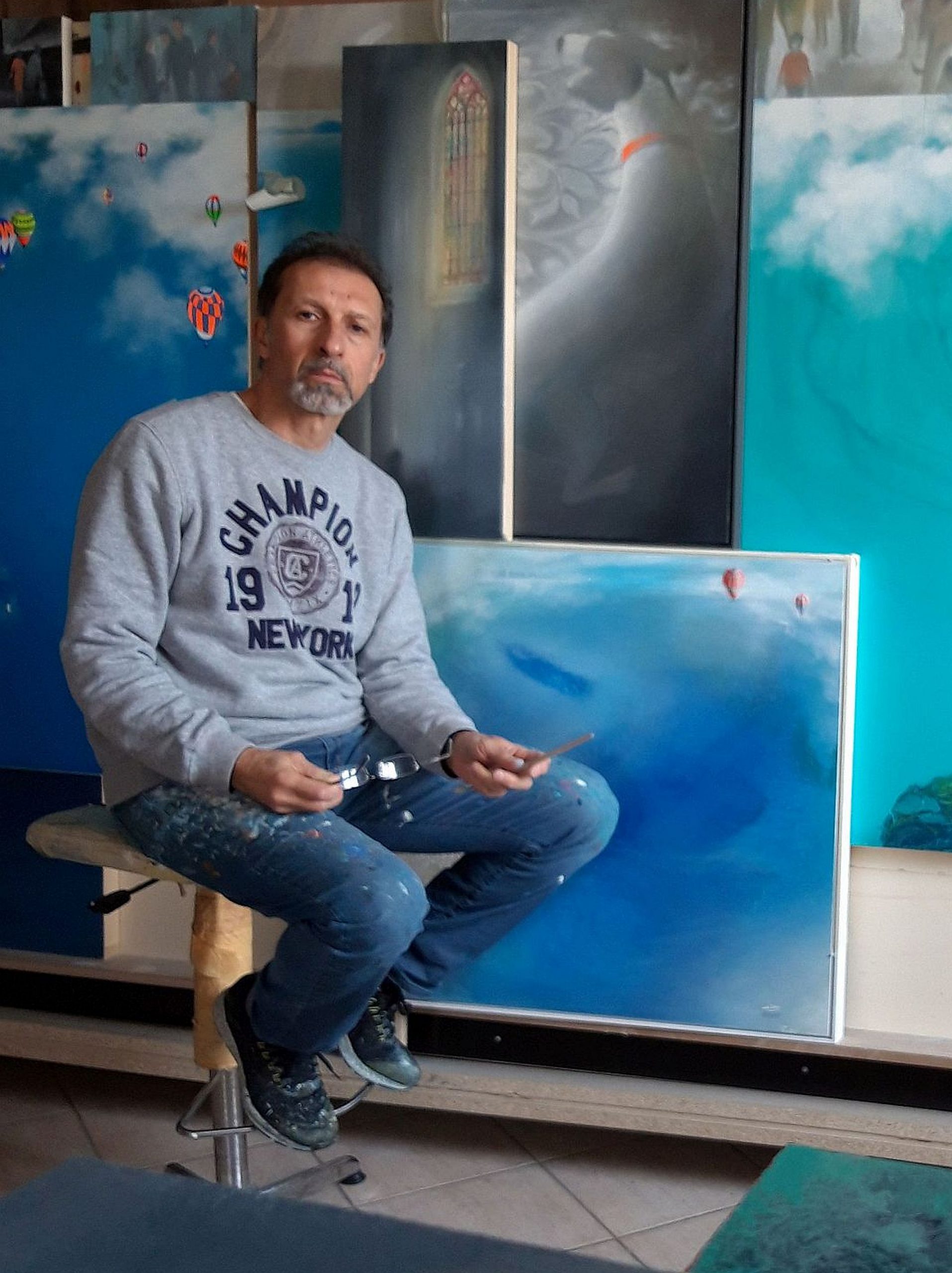 Andrea Giovannini was born in Lugo di Ravenna in 1962. He lives and works in Campagnola Emilia (Reggio Emilia).

After his artistic schooling in Reggio Emilia and Urbino he delved into his expressive research joining the ranks of members of the latest generation of the Italian “new veduta-style” painting. His work was centered around the study of the landscape through the lens of examining light and weather effects, with an intimist and metaphysical feel all at once. The artist began his exhibition work in 1981, and he collaborates with various art galleries and has been part of important shows in Italy and abroad.
The theme of the landscape in Andrea Giovannini’s work becomes a highly expressive tool for gathering the poetic vision of the places where evocativeness morphs into awareness of one’s own human experience in the balance between contemporary events and daily life, in harmony with the natural and historical setting where the urban component emerges characteristically.
His trips in Europe and the heart of the United States were decisive to his study of expression dedicated to spatiality as a descriptive category. After experimenting with various techniques and material linked to the need to transform the images between realism and sublimation of what he experienced and deeply loved, his painting started to focus on the use of mixed media on panel, favoring tempera and acrylic with pastel finishes.
To this regard, his Scenery teachings seems significant, which he did for some years at high schools, not just for the research into material and artistic vocabulary, but above all because he opened up to large dimensions, with a new sense of space and time. It’s no coincidence that the works in his most recent period as of 2018 are mostly entitled Backdrops, just that their stage has become the immensity of oceans, horizons betwixt land and sky, where the point of comparison is still human civilization in its most emblematic manifestations (airports, roads, cities), but with a more adventurous twist, one of total freedom.
Absorbed in the observation of poetically transformed reality, the artist has become a daring and playful explorer. Using different types of enamels on panel, Giovannini achieves drippings and glazing that hint at different depths, currents, nuances in the earth’s surface and seabeds. The effects of overlapping accumulation and fading—at times even taking advantage of the grain of the panel itself—truly exhilarate with their abstraction. At the same time, therein the artist identifies landscape elements or realistic details, which he then outlines with meticulous precision, leaving an impression of satellite views.
After the refraction of the wavelength of light, blue—or light blue—is the color of infinite spaces of the sky and sea, of unreachable horizons, of unfathomable depths. “Sky blue” has become the adjective to define divine characters or scenarios. As Friedrich Hölderlin said (Hyperion, 1793): “Lost in the immensity of blue, I look up, / into the aether and out into the hallowed sea, / and it's as if a kindred spirit opened its arms to me.” And yet, the sea, an infinite source of life, is also a place of mystery and unknowable anguish, of that which lies below the surface.
A sense of mystery pervades Andrea Giovannini’s works. Playing with sizes and material, he produces that physical and imaginative alchemy typical of the authentic work of art. 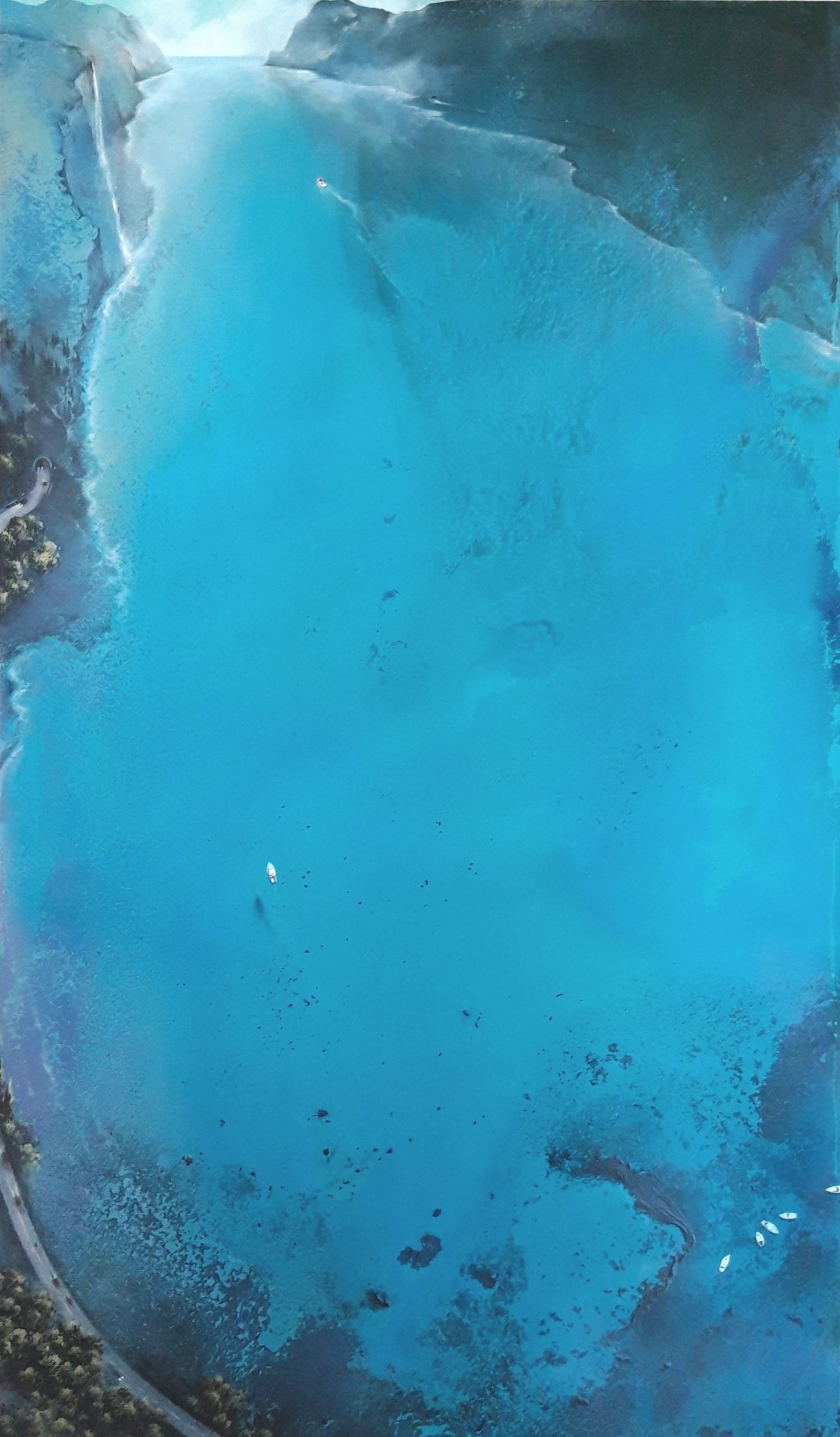 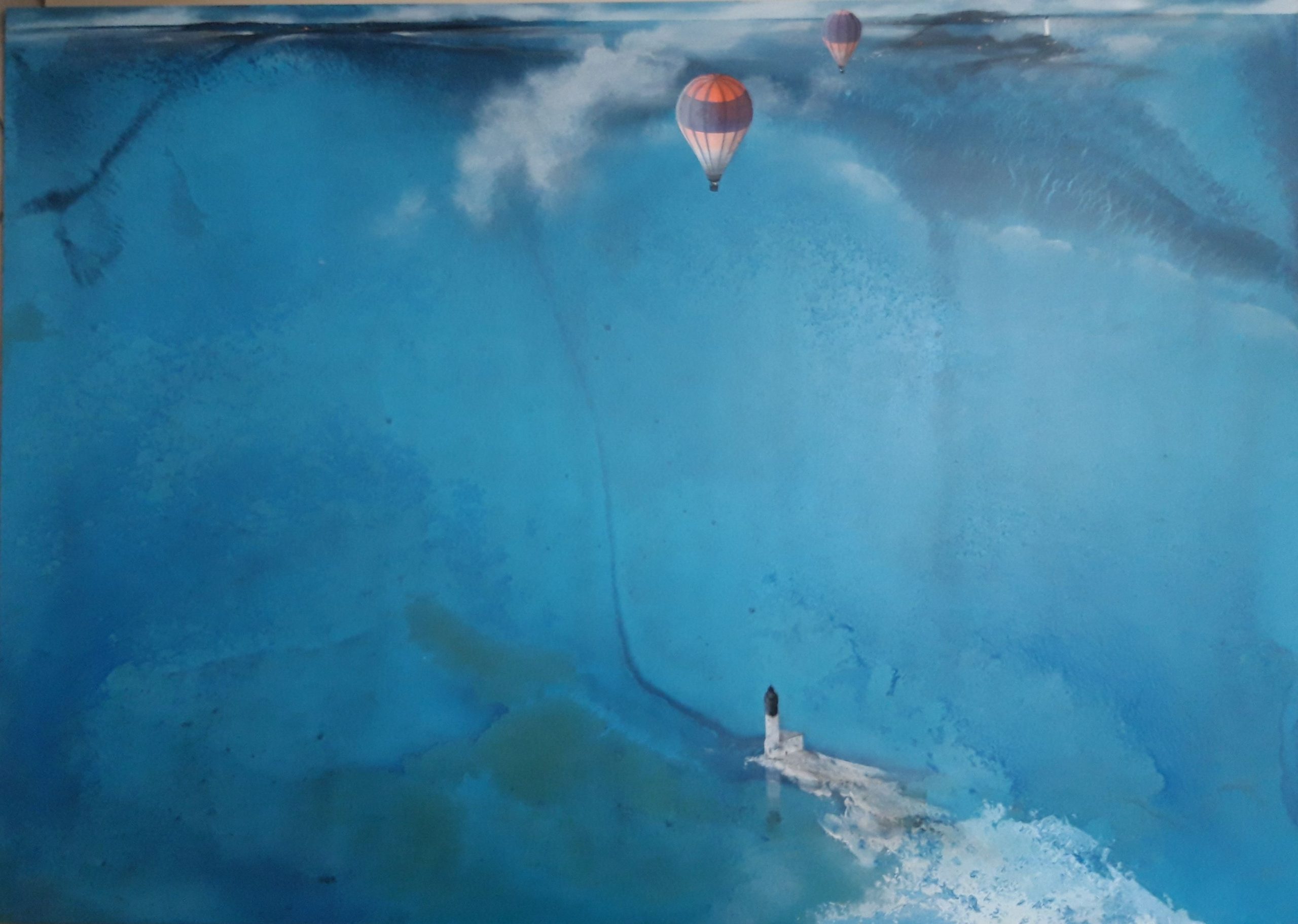 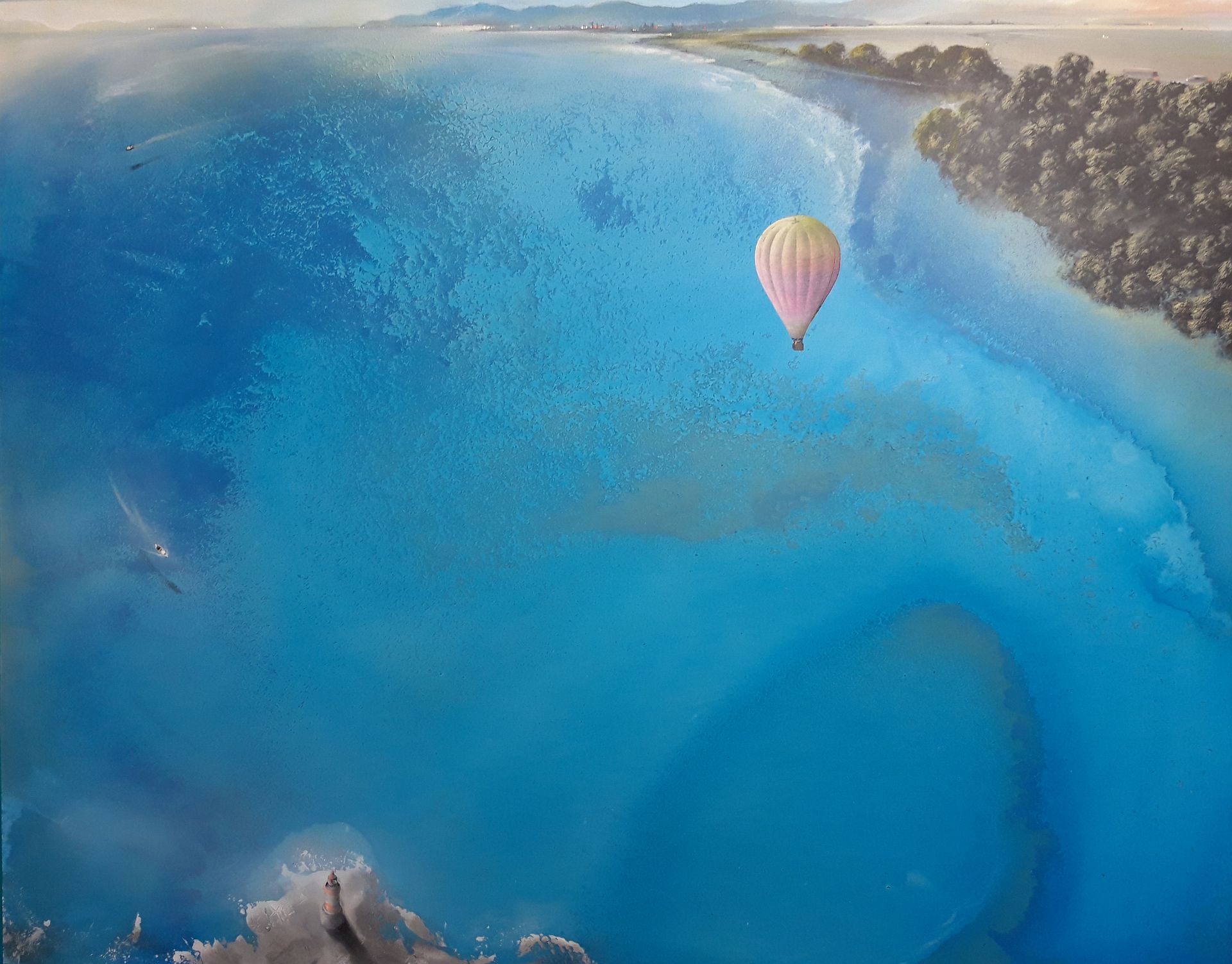 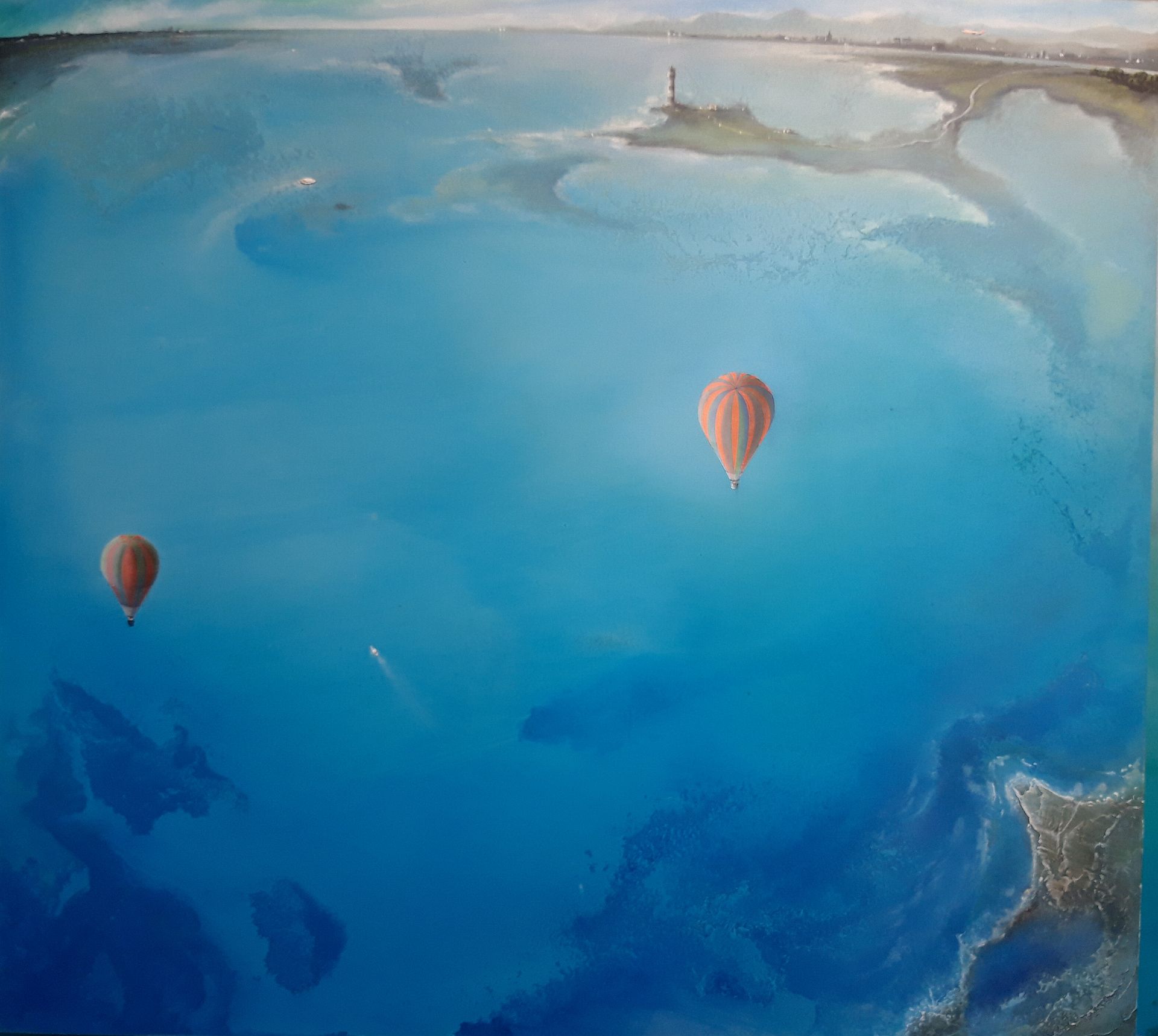 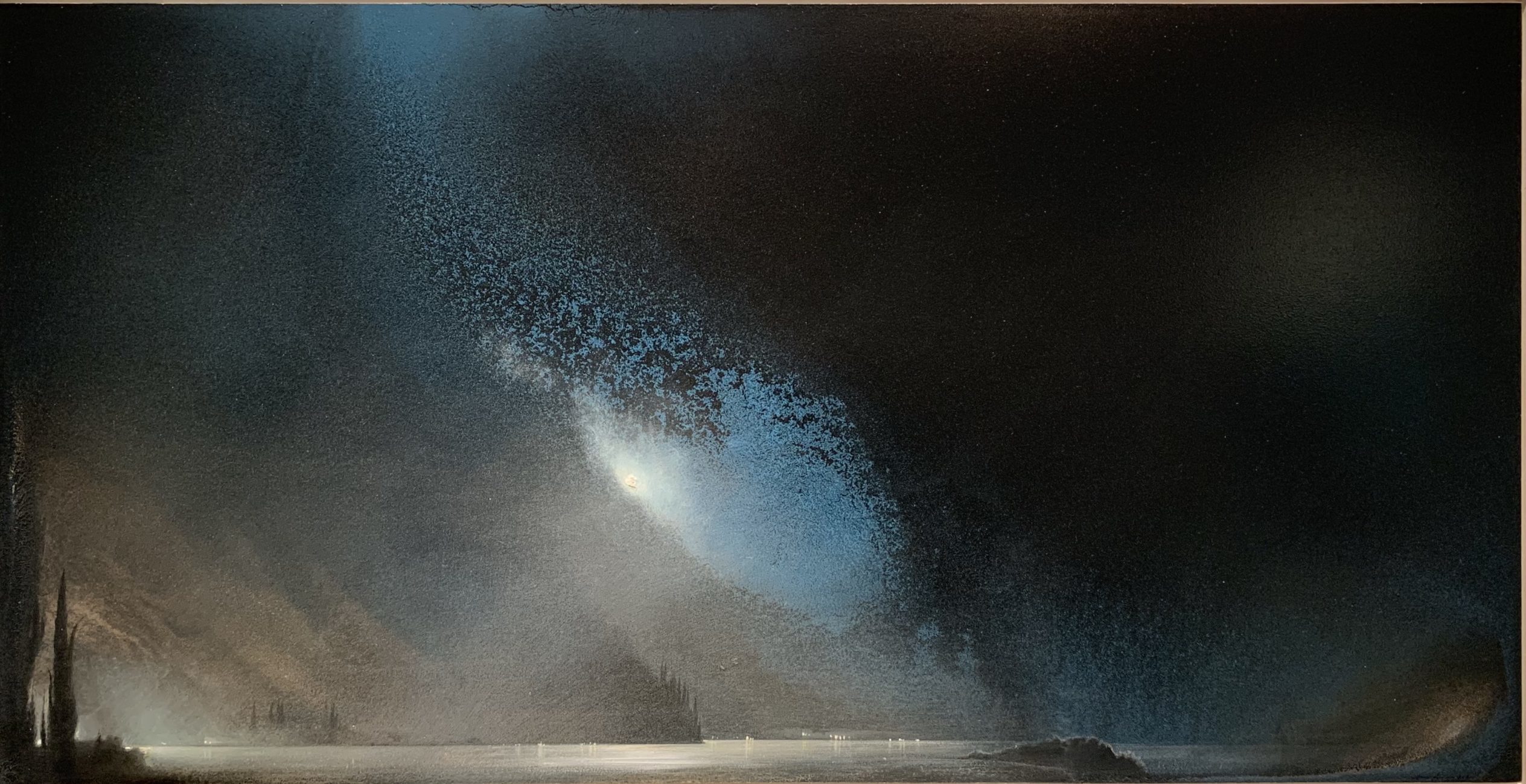 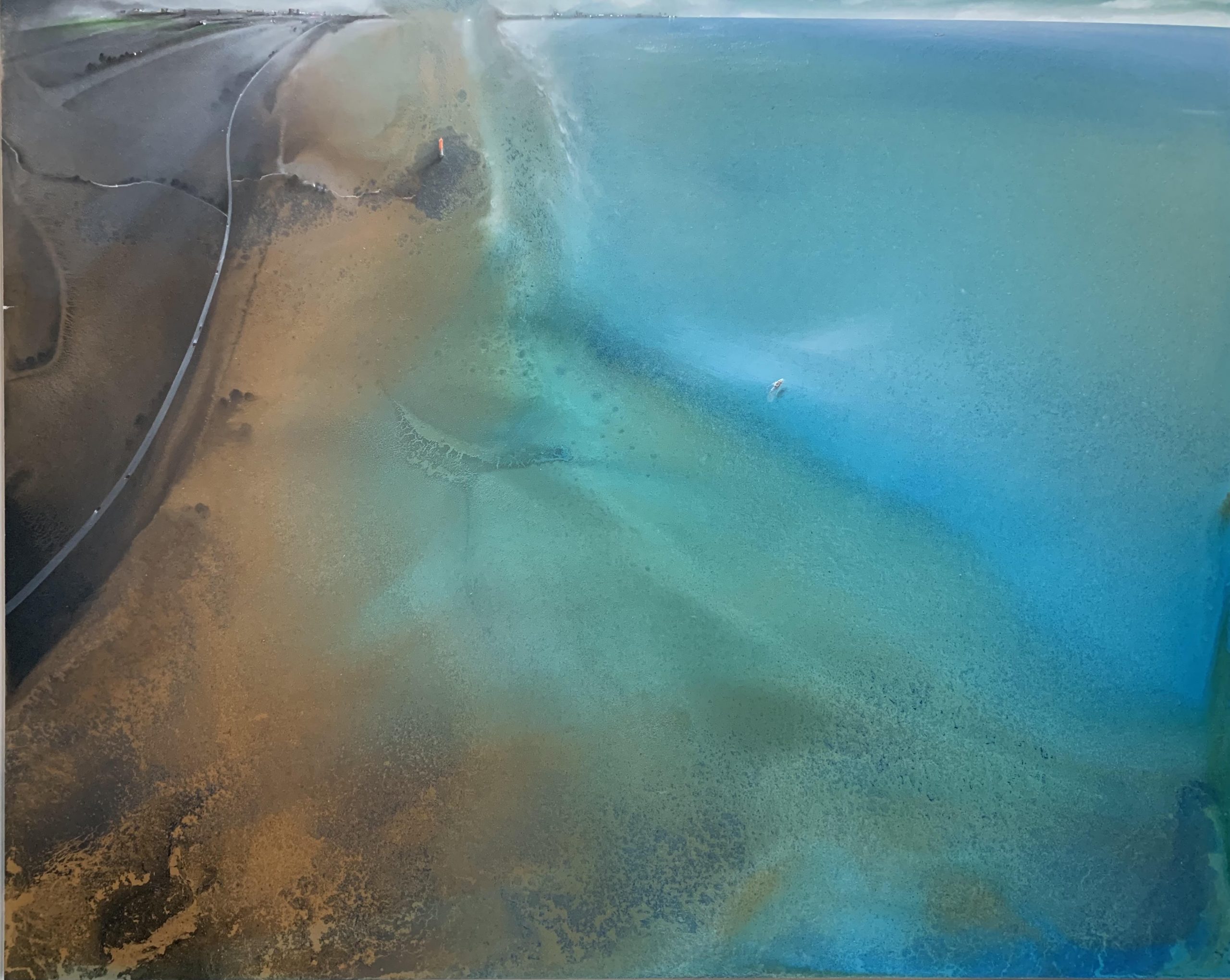 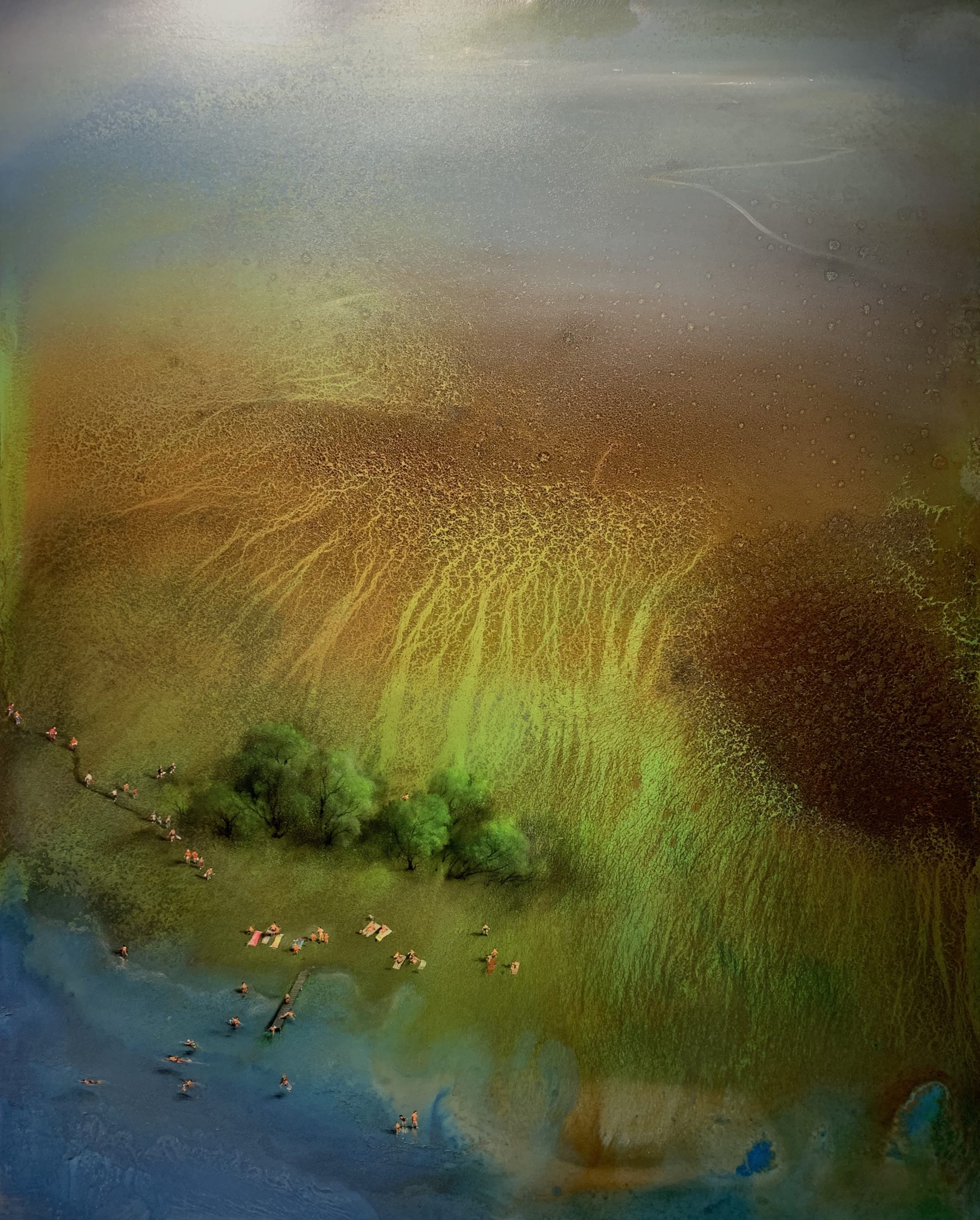 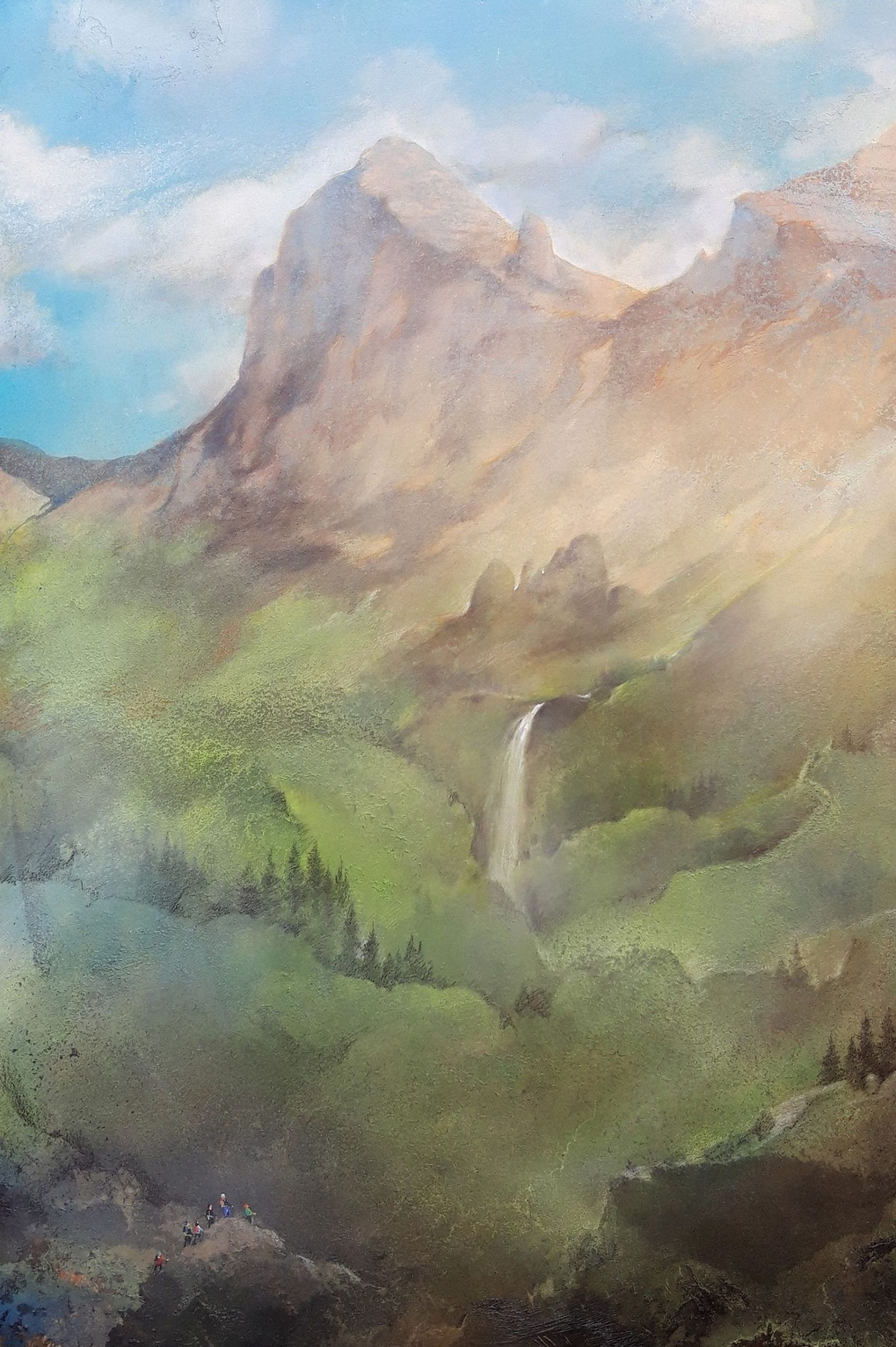 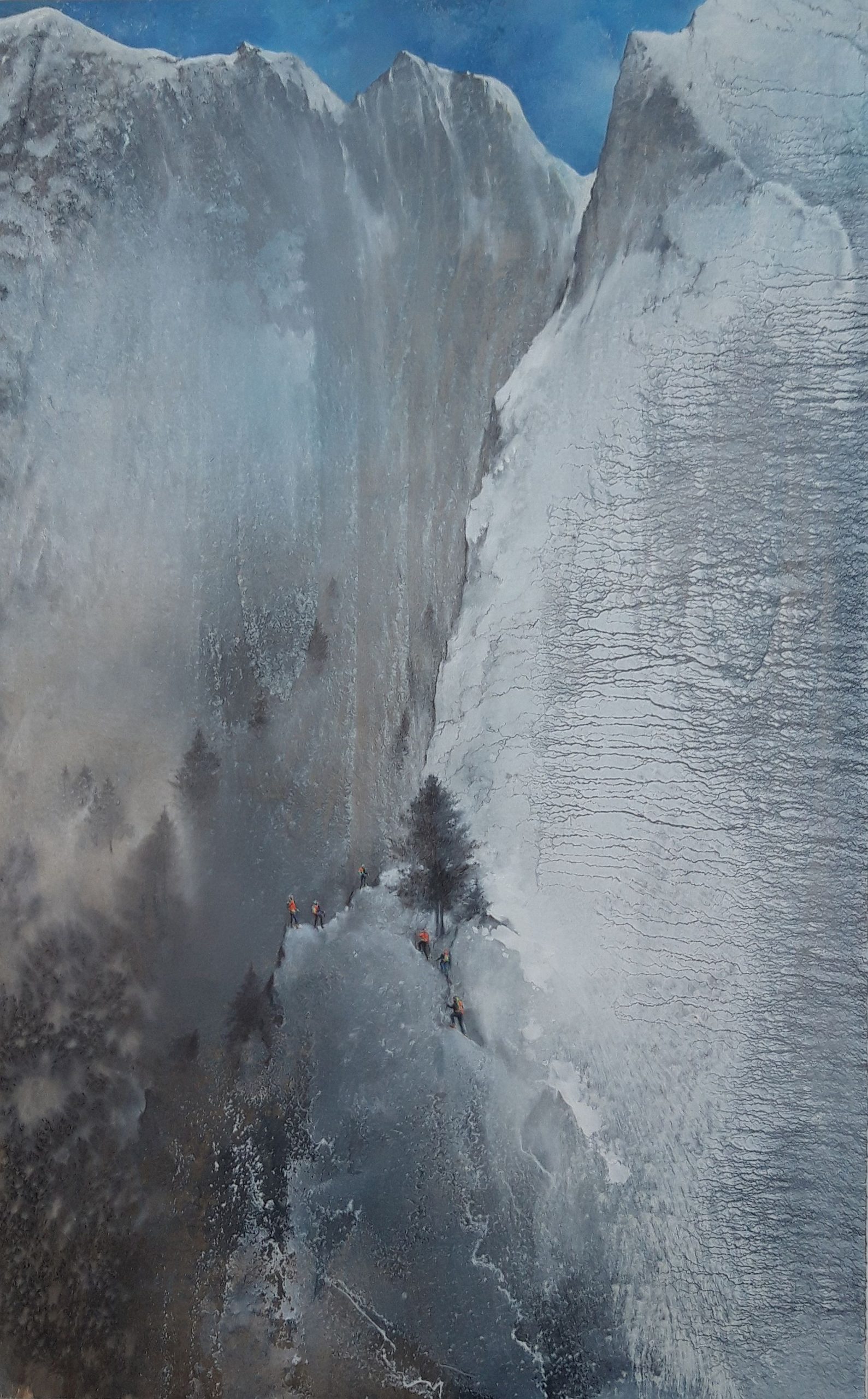 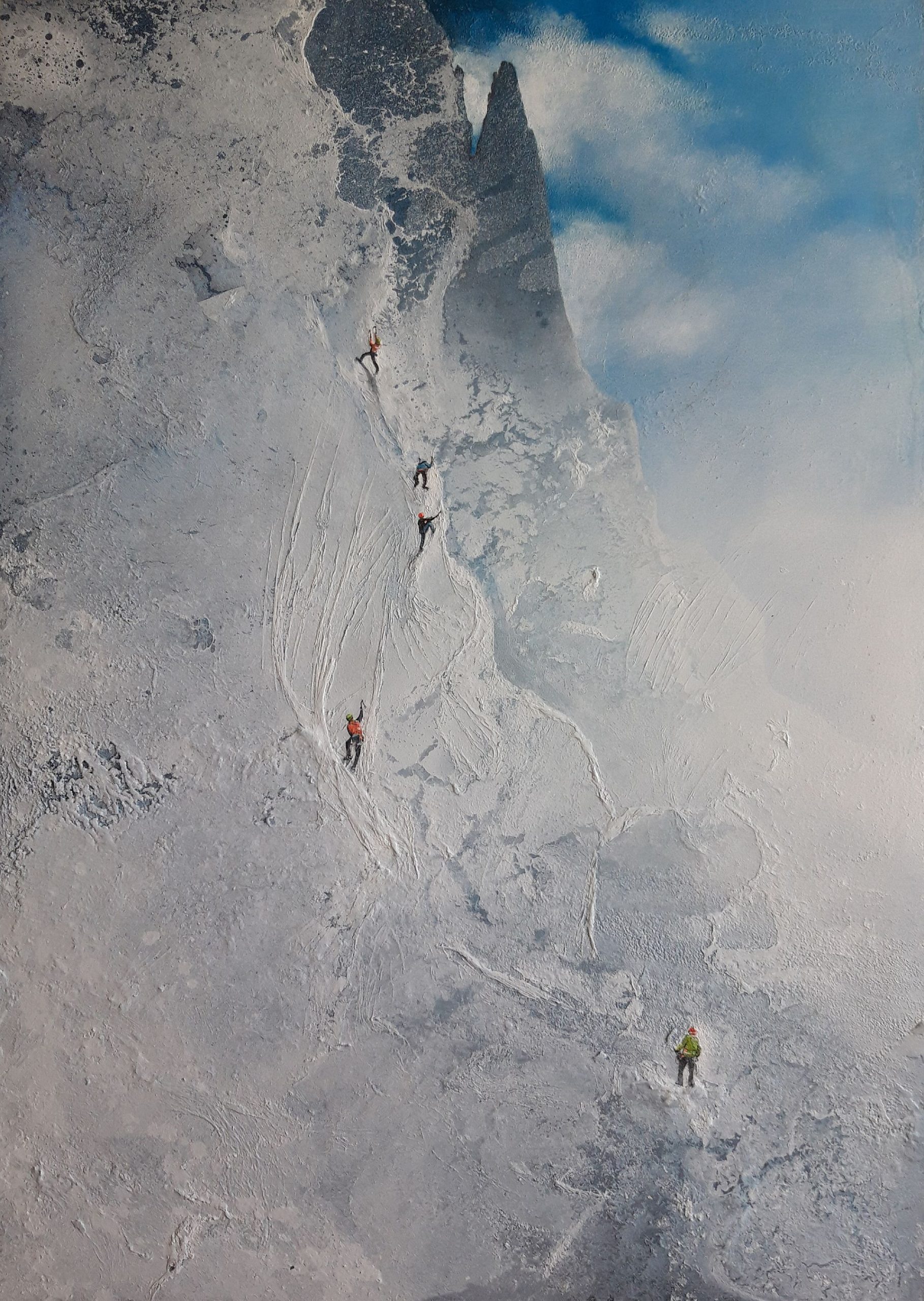 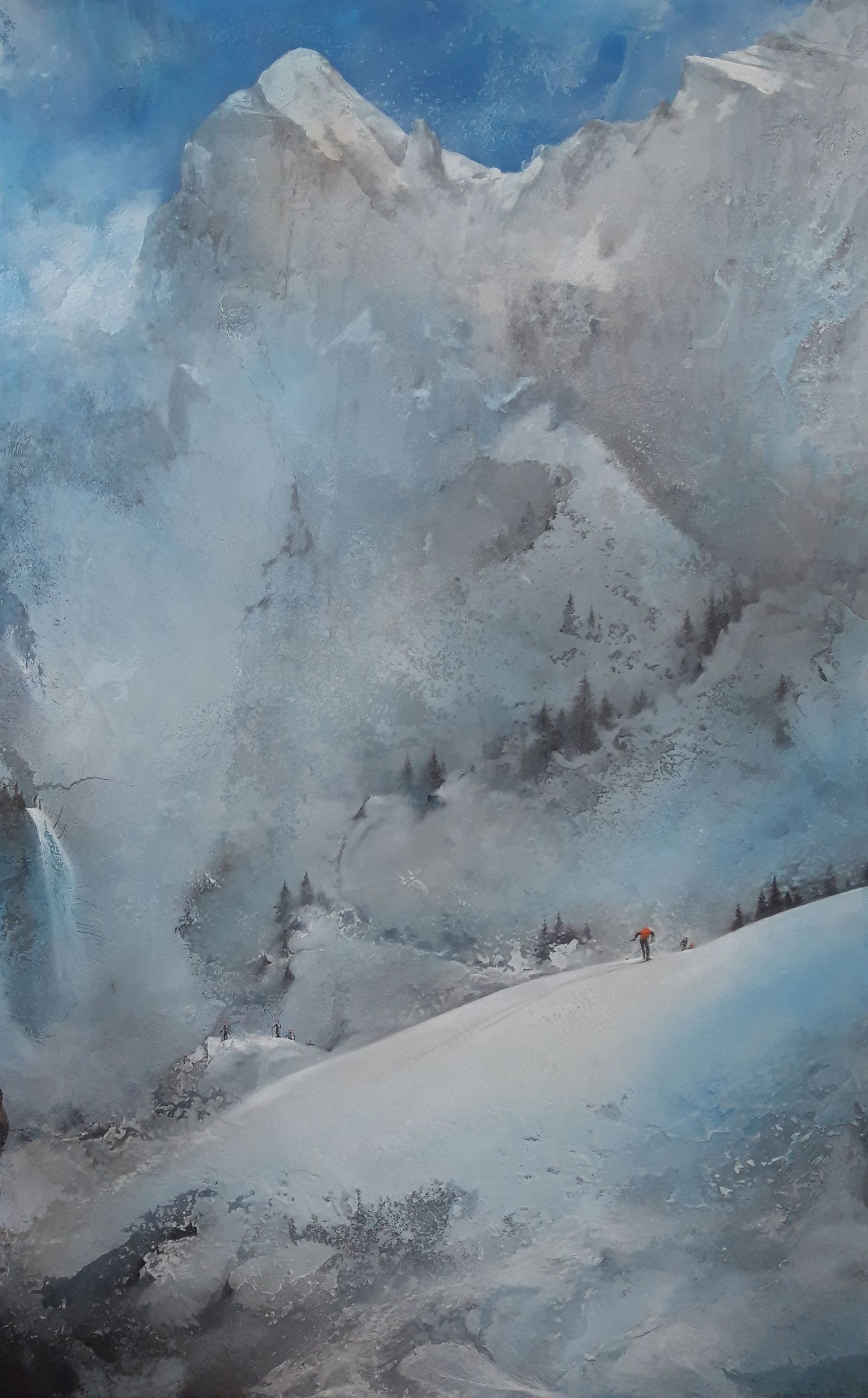